Bocas del Toro with Family and Friends. Travel Report No 62

Adventures in Bocas del Toro, Panama.      Report no 62
For corresponding pictures and captions go to Gallery 62
Written by Diana 14th May, 2013

We planned to be back on White Admiral on 9th February, to give us two days to get the boat ready for the arrival of Martin, Tonje, Tonje’s mother Selle Marie and our two grandchildren Hedda and Johan.  As usual we stopped en route in London to see Elisabeth and family, fun to see her two little boys developing quickly, especially noticeable in the younger one Soren, who had a few words when we last saw him in early December, but was now speaking in sentences! We treated ourselves to an evening at the English National Opera to see La Traviata, wonderful music, but I am never thrilled by modern  minimalistic productions, always have a suspicion it is done to save money! On our arrival at Heathrow, it was a shock to look at the departure board, and find that our flight, along with many others to northeast United States, was cancelled due to a huge storm in the area.  So we had to be rebooked, this time via Houston, and would arrive a day later in Bocas. Thanks to an obliging hotel in Panama City and Air Panama who changed our flights, we only had the extra expense of a night in Houston.

With a few hours to spare in Panama City, we took a taxi from Albrook Inn to the old area of town to see the historical area of Casco Antiguo which is being renovated. It will no doubt be an interesting area, but at the moment it is dominated by scaffolding and workers and seems a bit scruffy.  The very modern Albrook Mall was a contrast with all kinds of shops, restaurants and play areas. We got Stein a couple of new pairs of shorts at the sales, ready for warm weather.


White Admiral looked fine in Bocas Marina where we had left her three months earlier. She was  newly washed by marina workers, but there are always a few jobs to be done, and we worked hard to get her ready for the holidaymakers who were now due to arrive the next day.


The cheerful crowd arrived as planned, we got a water taxi from town to the marina and we decided to move out to a better anchorage where we could swim right away.
'
BASTIMENTOS AND ZAPATILLOS

We motored the short half hour journey across to the island of Bastimentos, where we dropped anchor in front of the up-market hotel  (by Bocas standards) Eclypse de Mar, where we had a walk in their beautiful wild garden with its abundance of tropical flowers. 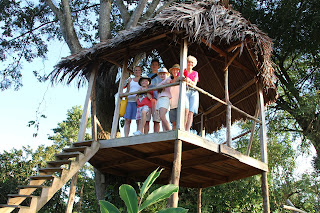 From a jungle tower there is a great view over the garden to the sea and Isla Carinero beyond. Afterwards Sella Marie treated us to a drink on the terrace of the hotel, and life didn’t seem at all bad, watching the sun go down behind White Admiral at anchor, with a glass of white wine or fruit punch in hand! 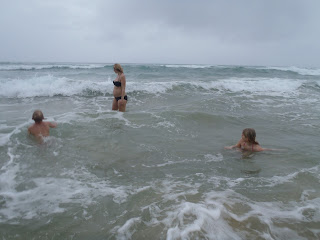 The next day we had more time to explore the island and we all set off on a longish expedition, crossing to the east side where there is the long, beautiful Wizard’s Beach with big breakers which attract the surfers. Hedda and Johan are like fish in the water, and enjoyed jumping around in the big waves. 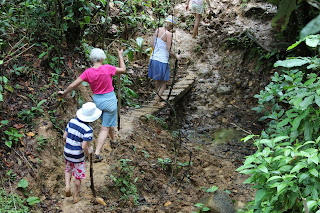 There had been quite a lot of rain during the previous days, which made the tracks across the island slippery and muddy, so we found the homeward ascent quite difficult, slithering about, some of us giving up sandalsaltogether and going barefoot, and Sella Marie landing on her rear end in the mud! At the top of the island it was lovely to come to the café ‘Up in the Hill’ run by Scottish Jennifer and her Argentinian husband Javier, whom we have met earlier, and relax with a cup of home-made cocoa and brownies.

We were keen to take the family out to the Zapatillos, two islands a few nautical miles from the coast, with palm trees, lush tropical vegetation and white beaches all around, certainly the most beautiful islands in the Bocas area.  The next morning was rather cloudy with not much wind, so we motored off, but did get a little genoa sailing on the way, and Martin caught a nice mackerel fish for dinner.  We anchored off Zapatillo 1, the more northerly of the two islands, and everybody was soon swimming and snorkeling in the 27 degrees  water.  However, there was a bit of a swell coming round the north of the island, so the next morning we moved over to Zapatillo 2, and found a much calmer anchorage, where we spent three days just enjoying the tropical surroundings, walking or jogging round the island, and snorkeling on the coral reef with its huge variety of fish. Including sting rays and sharks. It is always a bit of a thrill to meet a shark underwater, even if it is only a harmless nurse-shark! Selle Marie was quite new to snorkeling, but she is an old swimming champion, so this was quickly mastered.

Most of the other islands in the Bocas area are mangrove islands, not as attractive as the sandy ones, but still worth a visit, and can be very beautiful against the mountainous background of the mainland. They are the favourite of birds and alligators as well as sand flies, and are an important part of the tropical eco-system.

While we were motor-sailing back from Zapatillo 2, there was great excitement when Martin felt a huge tug on his fishing-line, and we were all amazed when he eventually managed to reel in a barracuda which weighed in at 7,3 kg!!  I am so glad that we found out about how to kill a fish very quickly with alcohol into the gills, much more humane and less dangerous , especially with a barracuda’s long  teeth in the vicinity. 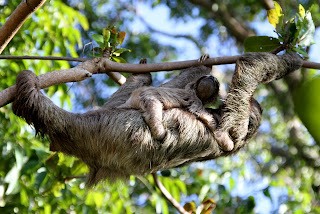 From here Hedda and I took a boat taxi back to Bocas town to stock up on supplies, before we again went to Zapatillo 2 for the last couple of days.

Weather was a bit mixed with some rain showers, but since the temperature is always about 28–30 degrees, it doesn’t matter so much. The days passed quickly and it was soon time to drive back through the islands to Bocas Town, stopping to drift near Crawl Cay for Tonje to have a last snorkel.  She was 5 months pregnant at this time, but that didn’t stop her in any way.
GODBYE MARTIN, TONJE  AND FAMILY, HELLO JIM

On 22nd February, it was time to say goodbye to the family and Selle Marie after 11 fun days together.  We had anchored just north of the town, and walked the few minutes to the small Bocas Airport. There was a long queue at the check-in, and we wondered why Martin took such a long time  at the counter. What happened was that he had paid too little for the children, thanks to a mistake in Air Panama’s data system, and had not only to pay more for their tickets, but also a penalty fee, even though it was their mistake! He let it go as he didn’t want to waste more time arguing. So off they went to spend  a nice day in Panama City, before getting flights back to Norway, and we went back to do some boat work and get White Admiral ready for new guests. We had four days to ourselves before my brother was due to arrive, nice to have some time to relax and read, and Stein always has some maintenance to do.


Jim arrived  on the morning if the 26th February, a sunny, cloudless day, the best for some time. We wanted him to enjoy  the Zapatillos in this weather, so off we went at once to the same anchorage, no sailing as there was either no wind or a gentle contrary breeze. Jim is an easy guest, he enjoyed just being aboard in the warm climate after a hard winter where he lives in Canada. We only had a couple of days to relax here, as we were expecting our new crew on 2nd March, so we motored back in the rain, the bright spot was catching two Spanish mackerels on the way, which gave us a nice lunch.

NEW CREW AND A CLOSE CALL

Frode Filseth, my colleague from the Eye department in Kristiansand and Andreas Hauge, Another Norwegian friend whom we first met through his sister, Ellen Hagemann in Kristiansand, had agreed to be our crew for the long trip from Panama to Florida. They arrived on the morning plane from Panama City on 2nd March.  They both love sailing, and especially Frode is very experienced, they have both sailed with us before and we have enjoyed their company. They did not know each other, but we were sure that they would get on well together, and this proved to be the case. They overlapped two days with Jim, so we gave them a little taste of the area with another trip to Bastimentos.


The recent rain had made the muddy tracks even worse, so we again slithered and splashed barefoot, sometimes on all fours, to get up to the café Up in the Hill for another cup of cocoa! We awoke that night in gusts of 30 knots to find that we were dragging both anchors, and were fast approaching the shore, but we managed to drive out in the dark to shelter behind Bocas Town and could anchor at first light an hour later. We blessed the electronic track from the trip out on our iPad chart, as with the strong wind and pelting rain we had very poor visibility. Not a very auspicious start for our new crew! Jim left on the morning plane on 4th March, not without complications as the previous evening plane had been cancelled because of the bad weather, and all these passengers had to be taken first, but he eventually got on his way.
The rest of the day was spent doing a huge shopping for the 5 week trip ahead, and getting White Admiral ship-shape. On 5th March, we moved to Bocas Marina to fill diesel and water, got some last fruit and vegetables, and off we went with our new crew to unknown adventures…Gallery 62

About Diana and Stein